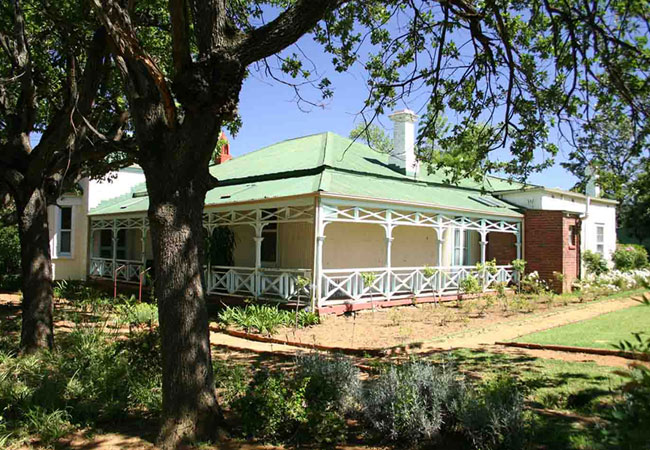 A visit to the McHardy House in Cullinan is a step back in time. All of the guides are members of the Cullinan Heritage Society and will ensure you have a wonderful visit. The museum is closed on Tuesdays but is open on all other days of the week from 10h00 to 15h00.

The building was the first in the town of Cullinan to be erected way back in 1903 and was home to William McHardy who was then the general manager of the Cullinan Diamond Mine. McHardy lived with his wife Evaline, four sons and three daughters on a tent on this stand while the house was being built.

Two of the daughters May and Evalina lived in the house until their deaths in 1984 at the ages of 98 and 94 respectively. The Premier Diamond Mine purchased the contents of the house from the McHardy estate shortly thereafter and turned the house into a museum.

When you visit you’ll find the home much like it was when the sisters died and you will hear interesting stories of the lives of the McHardy family on your 30 min tour.

CULLINUN MINE ABOVE GROUND TOUR

Visit Cullinan Diamond Mine to learn how diamonds are formed, mined and cut. The Cullinan diamond Mine is famous for the discovery of what became known as the Cullinan Diamond - the largest gem quality diamond ever found. The weight of the diamond is 3,106.75 carats and the diamond was named after Sir Thomas Cullinan who owned the diamond mine at the time. The stone bought by the Transvaal Government was presented to King Edward VII from England and was cut into large parts. The most famous of all was the Great Star of Africa also known as Cullinan 1.  The second largest stone is known as Lesser Star of Africa and forms part of the British Crown Jewels in display in the tower of London. The big hole at the Cullinan Diamond Mine is 4 times bigger and twice as deep as the big hole at Kimberley.